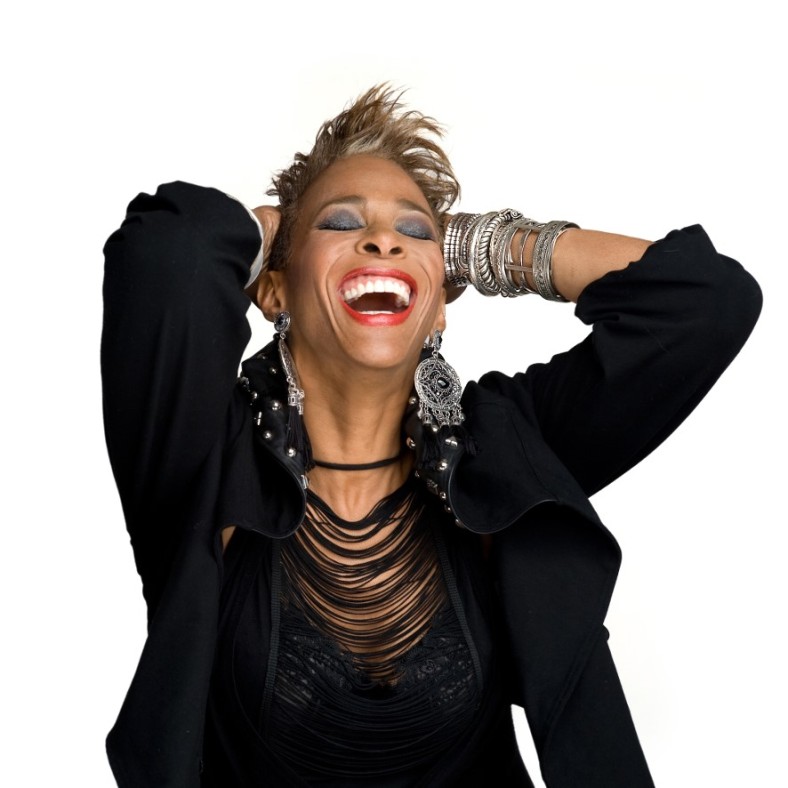 Born in Brooklyn, New York. Raised in Switzerland. A long-time Canadian who lives in Toronto.  That’s Shakura S’Aida, a truly international artist whose involvement in the Canadian music scene has been ongoing for the almost 25 years. Along the way, she has enriched the jazz, blues and classic R&B communities with her soulful voice, enthusiastic personality and commitment to her deep soul music.

Now she’s released Time, a double CD that gives her growing international audience tastes of her different musical approaches to blues, soul and rock and roll.

And Shakura takes her music wherever there’s an audience  in the past two years alone she has performed in the Caribbean, Moscow, Dubai, Romania, Switzerland, Canada, the United States, Australia, Austria, Italy, Germany, France, Macedonia, Switzerland and helped organize a festival in Kigali, the capital of Rwanda.

Whether she’s speaking Swiss-German, French or English, Shakura instantly connects with her audience — and at the same time richly demonstrates the multiculturalism that Canada prides itself on.

Time, her new double CD, was released in April 2012 by ElectroFi, a Toronto-based label with distribution around the world.  This third album was two years in the making, following the 2010 release of Brown Sugar on the German label Ruf Records. Her well-received independent debut, Blueprint, helped establish her a major figure on the scene and Time promises to continue that tradition by starting off the year by garnering four different national and international music award nominations:

The first disc of the new set, titled Time to Rock My Soul, opens with a masterful reworking (and rewrite) of an old Long John Baldry hit — and it sets the tough-edged tone of the disc perfectly.  And the second song — the album title track “Time” — proves that her bold, powerful take on classic rockin’ blues is a personal triumph. Best of all, the songs are delivered with aching, emotion-laced vocals and powerful instrumental support.

The second CD in the set, Time for the Blues, is a little more laid back (but only a little, on some of the tunes!), and more acoustic in its approach. There is a more noticeable nod to the past, given “Geechee Woman,” which could have been sung by Bessie Smith, and “Tell Me More,” a wistful Billie Holiday song.

Shakura S’Aida — pronounce her name “Shack-oora Sigh-ee-da”— began performing at a young girl. Her first steps into music began with a Toronto community band called Mystique, which found her belting out tunes alongside Deborah Cox, and then became the lead singer in a 13-piece world music band, Kaleefah, that would later be nominated for a Juno Award.

She quickly learned how to own the stage and “perform,” a skill she has since carried to the musical stage with roles in such productions as Ain’t Misbehavin’ and Momma, I Want to Sing, and to the theatre as an actress in the Toronto production of George Boyd’s Consecrated Ground in 2004).

She also carried off supporting roles in a number of Canadian-made films, and she was featured in an installment of Flashpoint, a major CTV television series that’s also been aired in the U.S.

As a solo artist, Shakura’s career has spanned genres and countries and taken her to some of the most noted stages in the jazz world. She’s performed at the Apollo Theatre in New York and has also been featured with the legendary Jimmy Smith; she’s sung in a backup choir with Patti Labelle, and is equally at home singing material with a Ray Charles tribute band, or presenting a one-woman show of the music of Nina Simone.  Her new symphony orchestra concert, “Blues in G Minor: 4 Women”, featuring the blues music of Etta James, Billie Holiday and Nina Simone starts touring Canada in 2014.

Shakura’s long-simmering career initially moved into high gear in 2008 with a triumph at the International Blues Challenge in Memphis, when she earned the runner-up position, competing against more than 100 bands from more than 20 different countries.

“I am truly blessed by all the incredible opportunities I have had,” says Shakura. “My life has been filled with amazing adventures; I can’t wait to see what happens next!”